Just taken delivery of your long-awaited and much anticipated the Jeep Wrangler JL and feel an immediate need to toughen it up with some choice aftermarket suspension, bar and interior upgrades?

No problem, ARB has got your back. In fact the Melbourne-based global leader in aftermarket 4x4 products is something of an old-hand when it comes to the new JL – which has just been released here – having immediately air freighted one upon its release in the US so that they could start work on their own dedicated line of products for it.

Highlight products would have to include a properly engineered roof rack fitting kit, all-new Bondi Deluxe and Stubby Bars, OME & BP-51 suspension, and full range of Air Lockers and diff covers to suit all model axles.

With the growing popularity of the Jeep Wrangler JL for overlanding and touring ARB has developed a special Roof Rack Fitting Kit to fit in conjunction with the company’s range of roof racks.

The kit uses the strength of the Jeep Wrangler JL four-Door’s roll cage and tub section to distribute the roof rack load to these parts of the vehicle and achieves a dynamic load rating of 130kg making it ideal for fitting a rooftop tent to comfortably sleep two adults. 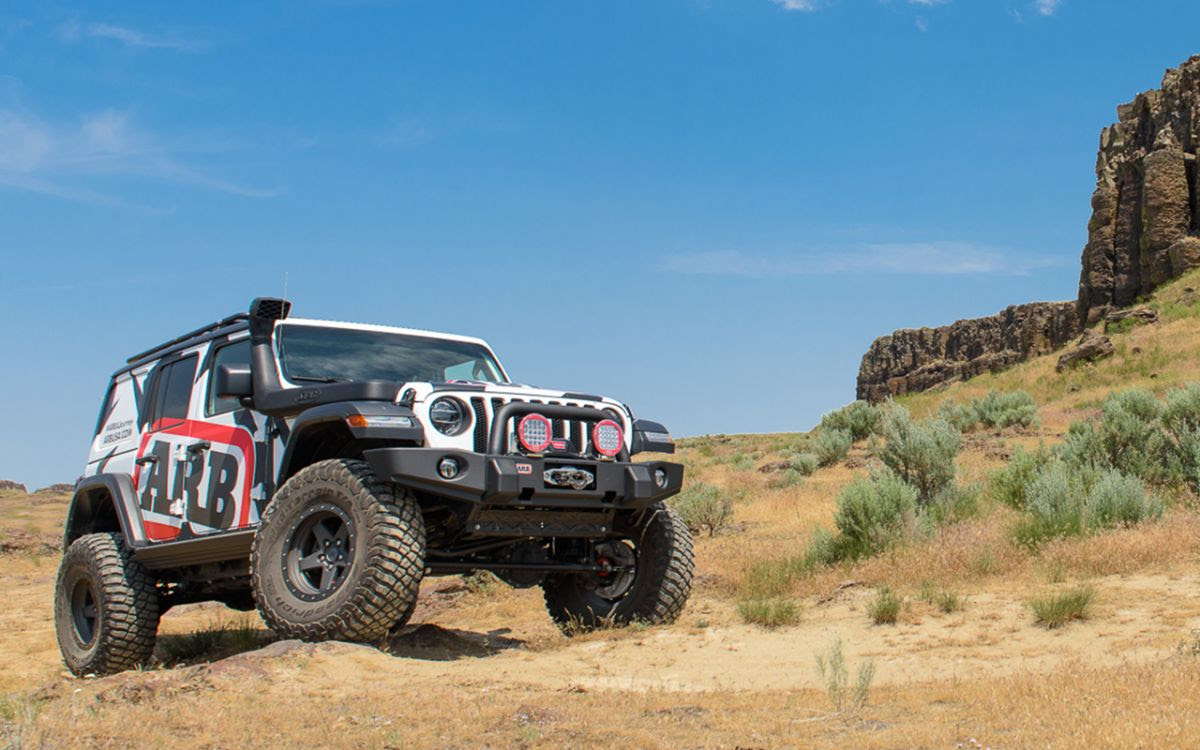 With the release of the new Jeep Wrangler JL, the engineers at ARB had the opportunity to develop a new style of bar which celebrates the company’s heritage, whilst incorporating a fresh, modern look.

The new Bondi Deluxe Winch bar is recovery-ready with two highly visible red chassis-mounted, 8T rated recovery points and centrally located high lift jacking points. An integrated winch cradle can be separated from the bar for ease of install, and maximum functionality is maintained with provided mounts for various styles of driving lights or aerials.

Press-formed apertures in the outer wings provide fog light surrounds suitable for retention of the OE fog lights. The Bondi Deluxe Winch bar is pre-treated with a zinc shield for superior resistance to corrosion, before being coated in an Integrit finish which is designed for maximum aesthetic appeal in an ultra-low sheen, matte finish. Visually the finish is similar to the OE flares of the JL. The bash plate underpanel features a contrasting vintage silver powdercoat finish.

The OME engineers’ objective as far as the new JL Wrangler is concerned was to develop a complete suspension system suiting both two and four-door variants. Comprehensive research and vehicle testing resulted in OME creating an integrated 90mm (3.5 in.) lift kit (65mm/2.5 for Rubicon) that easily bolts on and is ready to handle serious off road action.

While doing so they also expanded the range of Differential Covers and are pleased to release new versions of their Competition Diff cover to suit the Jeep Wrangler JL Sport, Sahara and Rubicon models.